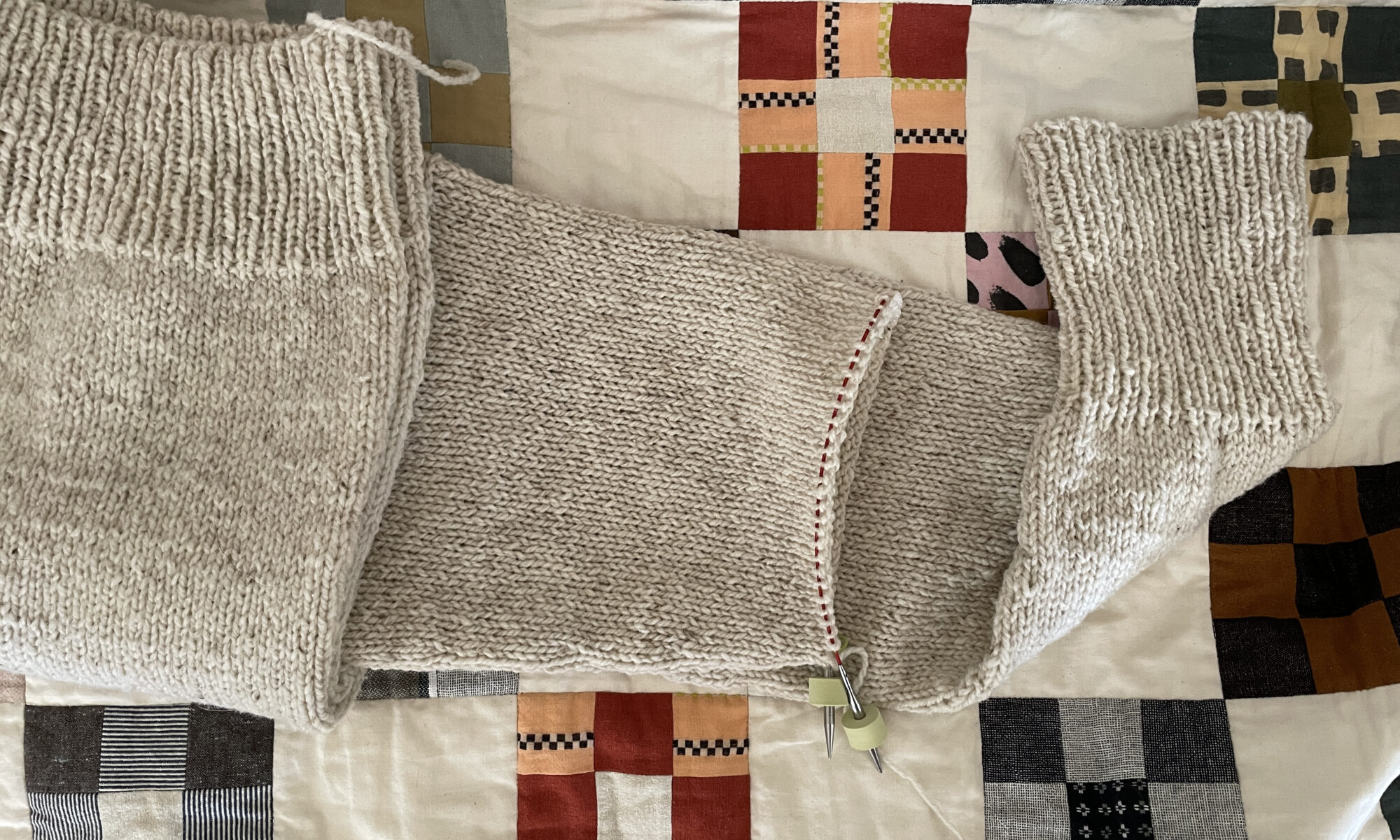 I did it. I made a sweater with non-bulky yarn. It’s the Towns Sweater by Ozetta and I made a size M with Brooklyn Tweed’s Shelter in the color Fossil.

I learned so fricking much knitting this. I learned how to shape a neckline on a bottom up sweater, the kitchener stitch, how to pick up stitches, how to create a folded neck with a stretchy BO, math to adjust for row gauge, K2tog-L for sleeve decreases, the sewn tubular cast-off technique, and how measure and block a sweater. SO COOL.

Shortly before starting this, I learned how to knit continental and decided I would knit the Towns entirely in this style. I should have realized during the hem ribbing that my purls were much looser than my knit stitches, but I pushed through, hoping that magical blocking would smooth things out (that only sorta worked). Things got weird once I was knitting flat and there’s definite striping above where I split for the sleeves.

Joining the shoulders was where things got real spicy. I messed up both shoulders. The first one had what looked like only a small imperfection but I couldn’t leave it alone and once I snugged everything up, it turned into a giant, loopy knot. The second shoulder had a section where I slipped the stitches the wrong direction. It took going to a LYS to learn how to fix this mistake. I also bought some super thin cording to use as lifelines, which I throw in all the time now.

The neckline BO was a mind bender. It took a while to figure out how to hold everything and there’s a sliiiiiiight twist, but not enough to impact the wear.

My row gauge is always off, so the first sleeve I made was much too long. Thanks to math, I was able to figure out how many rounds I needed to remove to get the sleeve to be the right length. It was so exciting when it worked, but I did need to knit three whole sleeves to figure it out.

Despite having purchased skeins from the same dye lot, there’s a clear color difference between them. I feel like it’s less noticeable when it’s worn, but is super obvious when laid flat.

Despite its flaws, I am so pleased with this sweater! It’s going to get a lot of wear once it cools down.