Since I started logbooking, my sketchbook practice has pretty much come to halt. I started my second Shinola back in May of 2018 and I’ve only filled about a third of its pages.

This past week I definitely started to feel its absence, so I brought my sketchbook to work and in my more independent/chill classes, I worked alongside my kids.

It feels good and I’m hoping I can find a balance moving forward.

Hi 2019! You’re the year I’m going to figure out Adobe Illustrator! There are two main reasons for this goal: The first is I need to diversify my skills for that impending career change and the second is that I want to design and potentially even produce my own line of fabrics.

As the child of two graphic designers, I really missed an opportunity to learn this software well before my 30s. But, that type of thinking won’t help me now, so while I was home for the holidays, I sat down with my mom for several in-person tutorials.

It is a powerful and imperfect software. Aside from there being a million different ways to do one thing, it has some annoying glitches. It was actually a little comforting to see my mom, a person who has used the creative suite for many years, occasionally struggle to make a thing happen on our computer screens. But, with just a few curse words and a lot of ⌘z’s, I was able to get the basics down for creating repeat patterns!

In the name of learning, I’m going to challenge myself to create one repeat pattern a week for 10 weeks and share them here on the blog. I’m having a Repeat Pattern Party! Will those 10 repeats lead to a fabric collection? Maybe. Hopefully. But honestly, this self-imposed challenge is going to be focused on learning to navigate the software with some ease.

A few folks have asked which sketchbooks, pens, and general art media I prefer. Here’s a partial dive into what I use:

Sketchbooks – I regularly use several different sketchbooks depending on what I’m doing. For sewing plans, media experimentation, and more in-depth drawings/paintings, I LOVE the Shinola sketchbook. It has the exterior beauty of a Moleskine, but with higher quality paper. The paper is a crisp white with a bit of tooth and can actually hold wet media unlike Moleskines.

For my Logbook, I use a cheap notebook from Muji. This isn’t the exact one but it’s very similar. I love it because it’s cheap and kinda crappy, which almost eliminates the fear of the blank page.

To capture my patternmaking class notes and ideas, I use a Canson XL Mixed Media sketchbook. I always affix some fancy paper to the cover, like this Elizabeth Suzann packaging.

Ink Brushes – I use gray and black ink brushes for both shading and covering larger areas (and mistakes!).

Pencils – I haven’t been doing much with graphite lately. I made the conscious decision to draw mostly with ink because it forces me to slow down and commit to the mark. When I do use pencils, Blackwings live up to the hype.

Pens – I use a lot of pens but these Pentel Arts Tradio Stylo pens are super messy and fun to use in my logbook. For a while, I didn’t realize I was using just the refills, which were a pain to hold. Then when we were in Paris I found the case that they fit in.

Sharpies – For my logbook I use a variety pack of Sharpies. I like how they bleed through the cheap Muji pages of my logbook.

Watercolors – I use Case For Making watercolors which are handmade in San Francisco. I took two workshops with Alexis (owner) and most of my pans are from those workshops!

They really are the best watercolors. So much pigment!

I also do love a good Micron Pen. I use a combination of handmade bags and tins to carry these supplies with me.

My best advice for starting a drawing practice is to just start. Be fine with it not looking how you want immediately. It took me about three weeks of daily logs to find my style and I’m sure it will change. Draw your making plans! Drawing became more of a daily thing for me when I started documenting all of my sewing plans in a sketchbook. There’s so much inspiration out there, it’s really helpful to capture it on paper. Also carry your sketchbook with you everywhere. I used to feel really self conscious about drawing out in public, but the truth is, no one is looking at you. And if they are, they’re probably interested in drawing too!

And read this article to re-frame your drawing mindset.

My main goal for 2018 was to Draw More. It wasn’t until mid-May and after re-reading Austin Kleon‘s book, Steal Like An Artist, that I was able to figure out how to make it an almost daily thing. I’m so glad I started this practice. I’m so humbled by the challenge of keeping it up, especially when traveling.

These pages include our trip to Belgium and France: 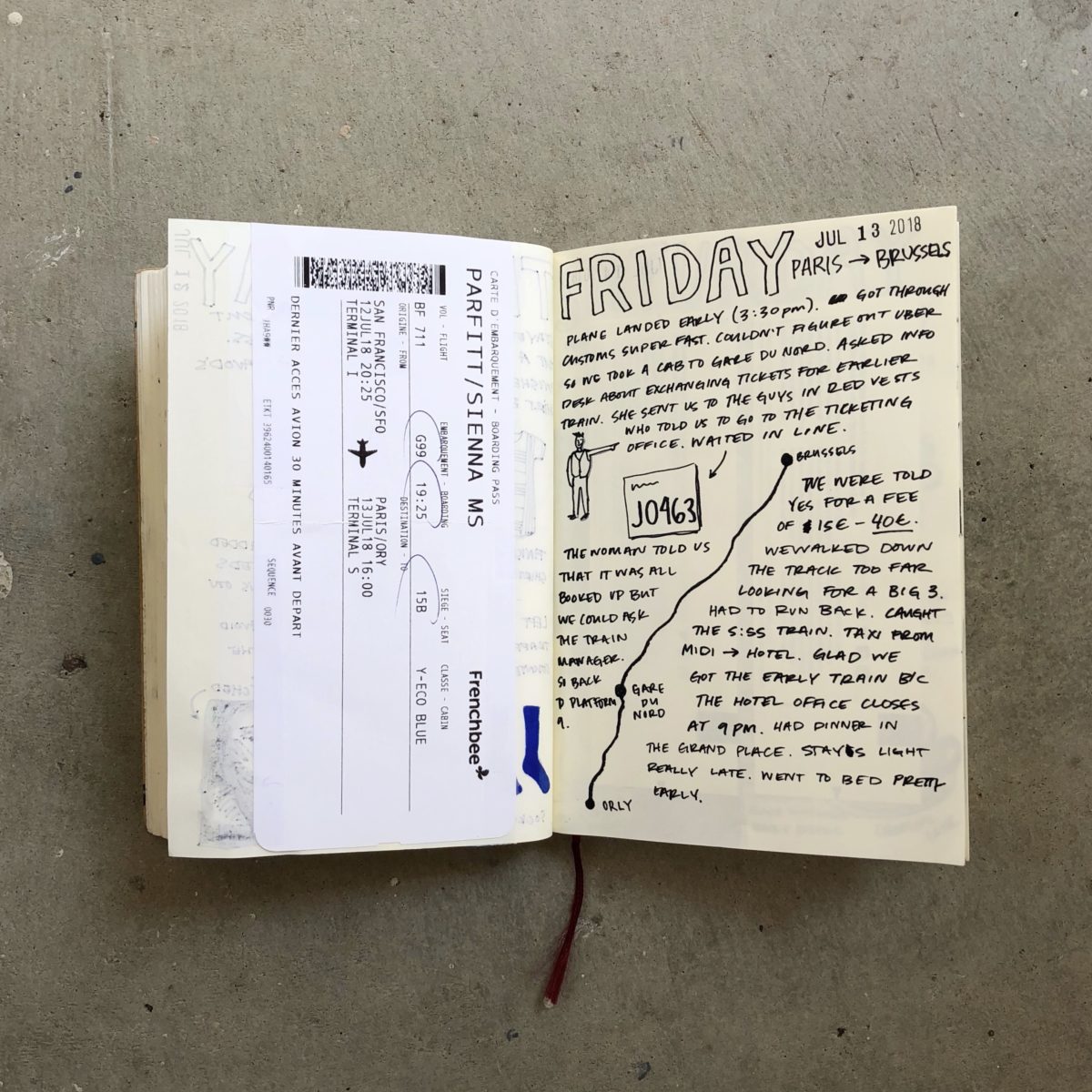 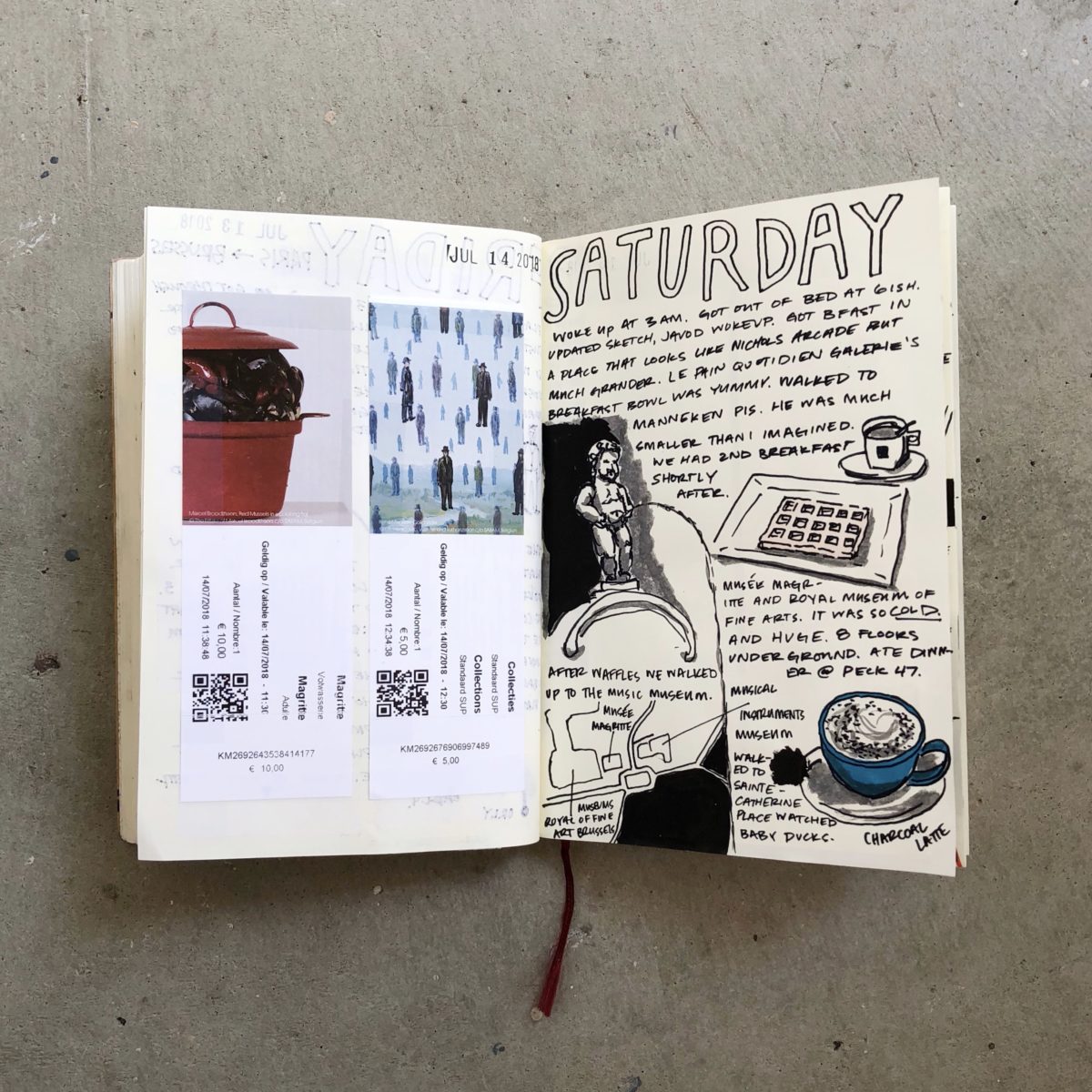 I didn’t bust out my Shinola Sketchbook as much as I thought I would. BUT I did draw a few things and that’s a win. 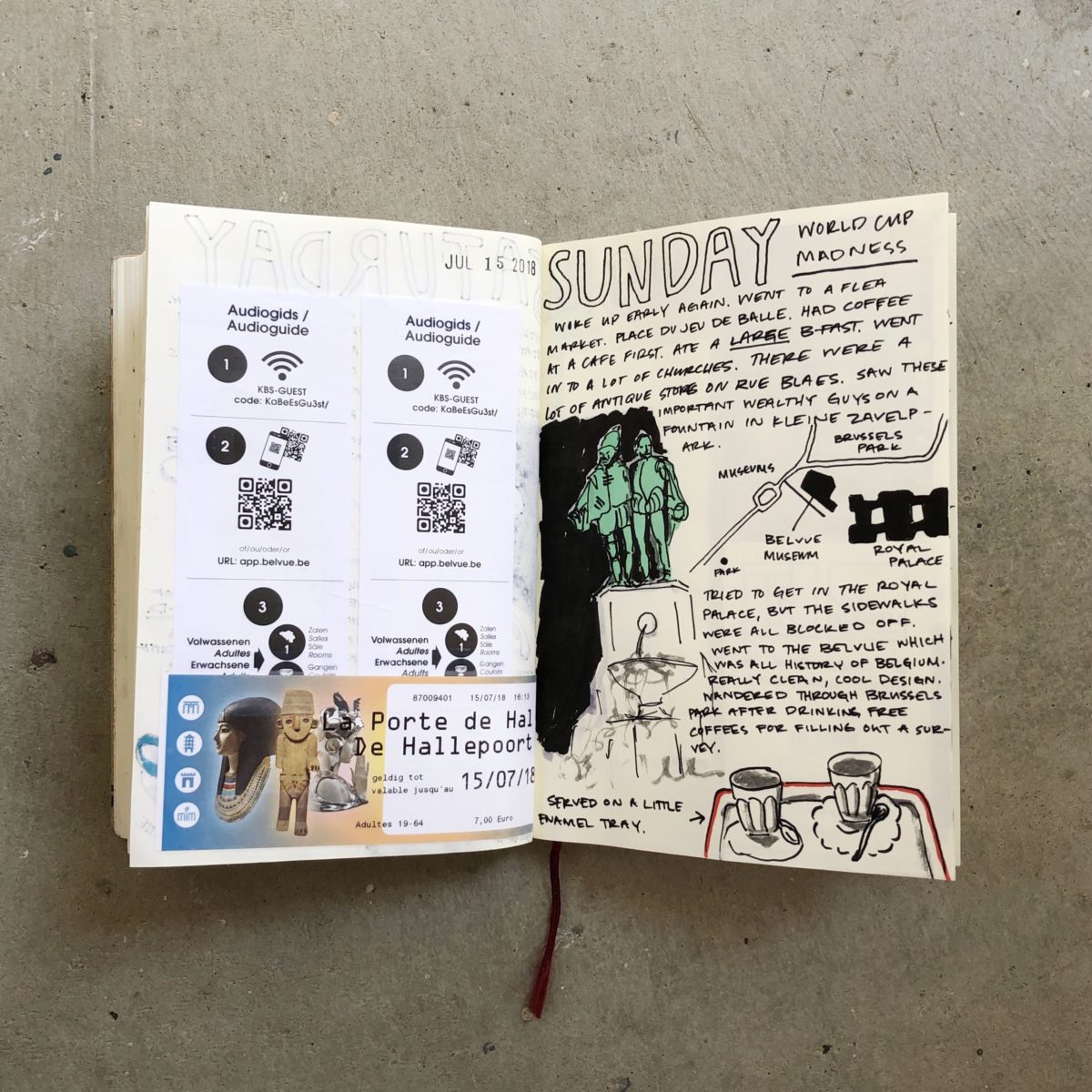 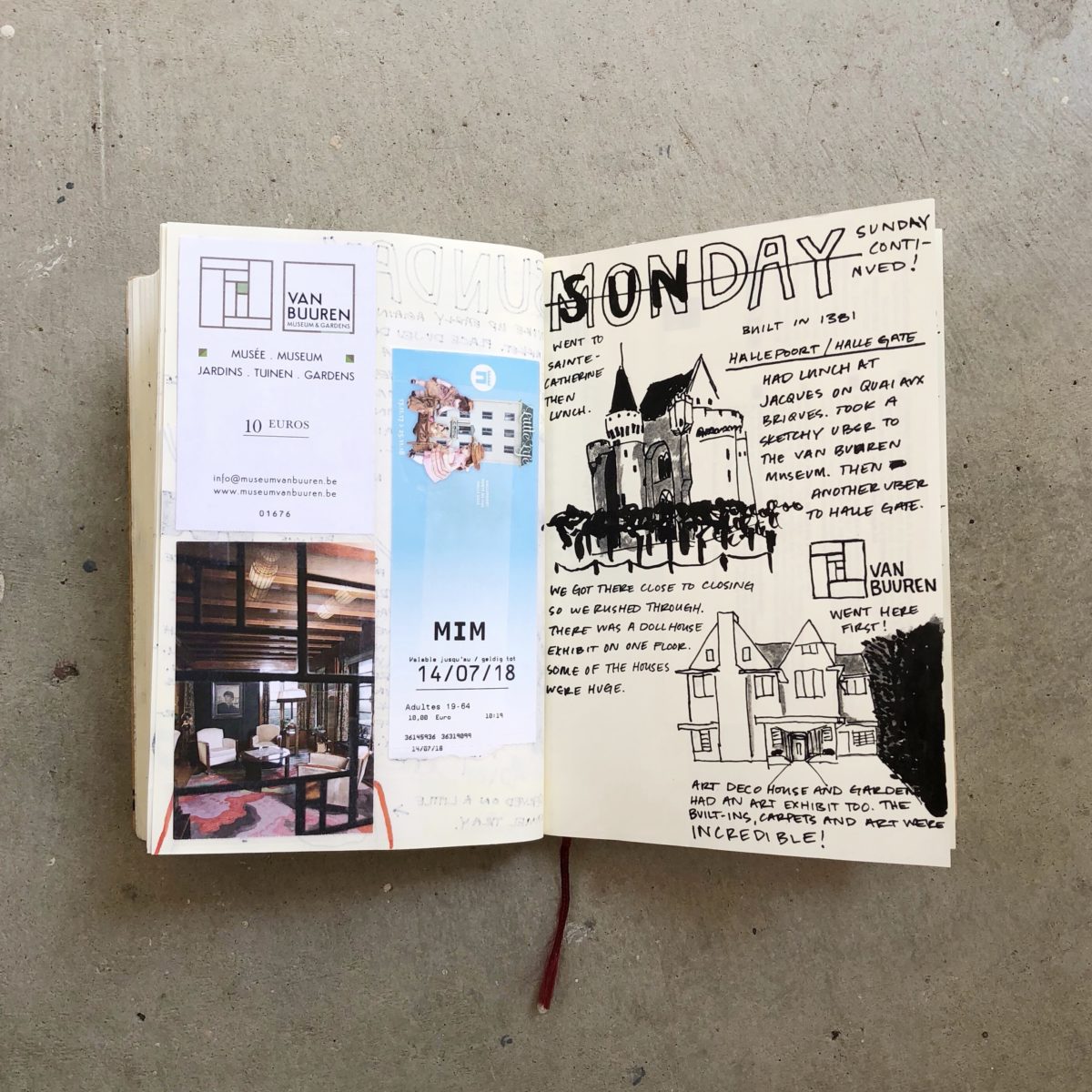 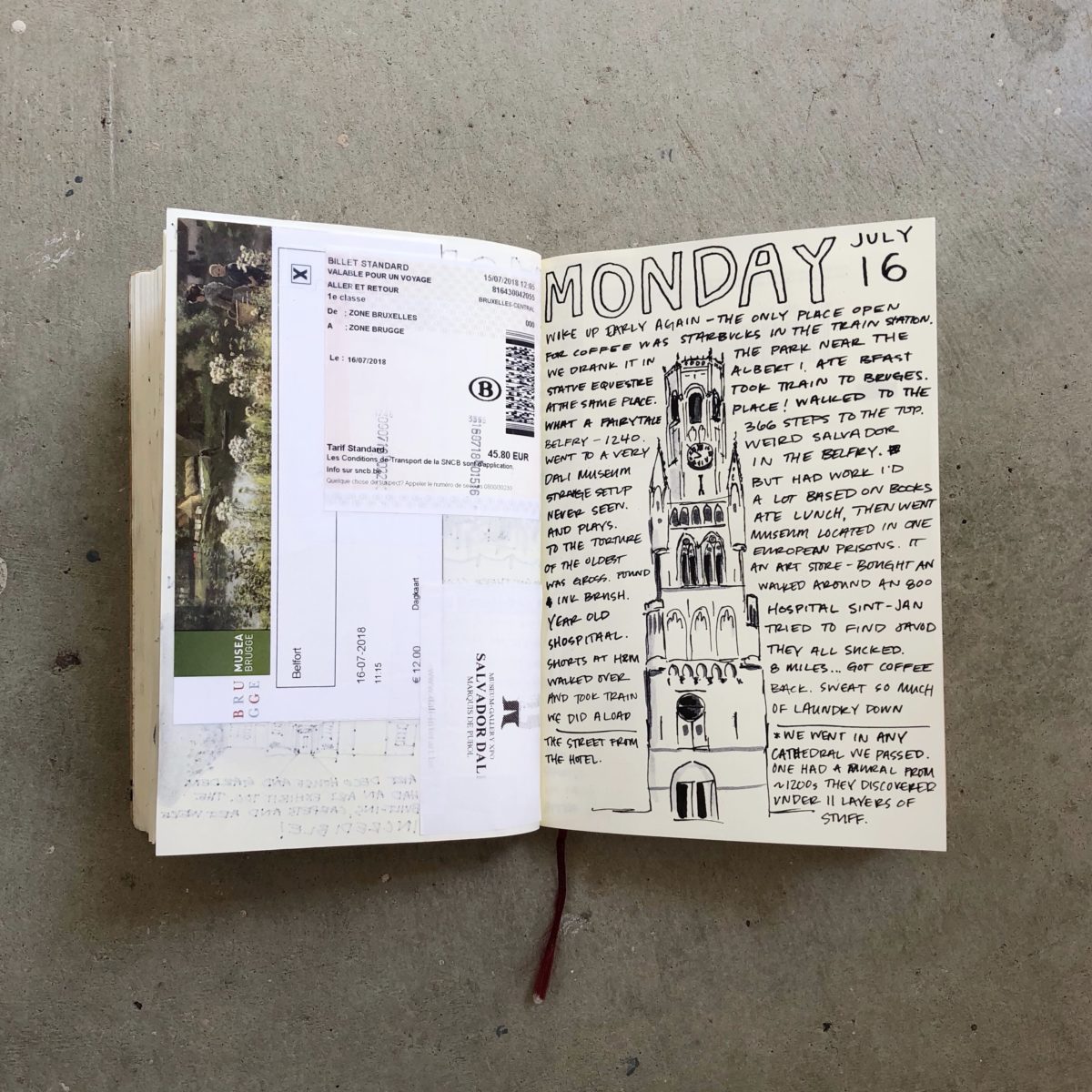 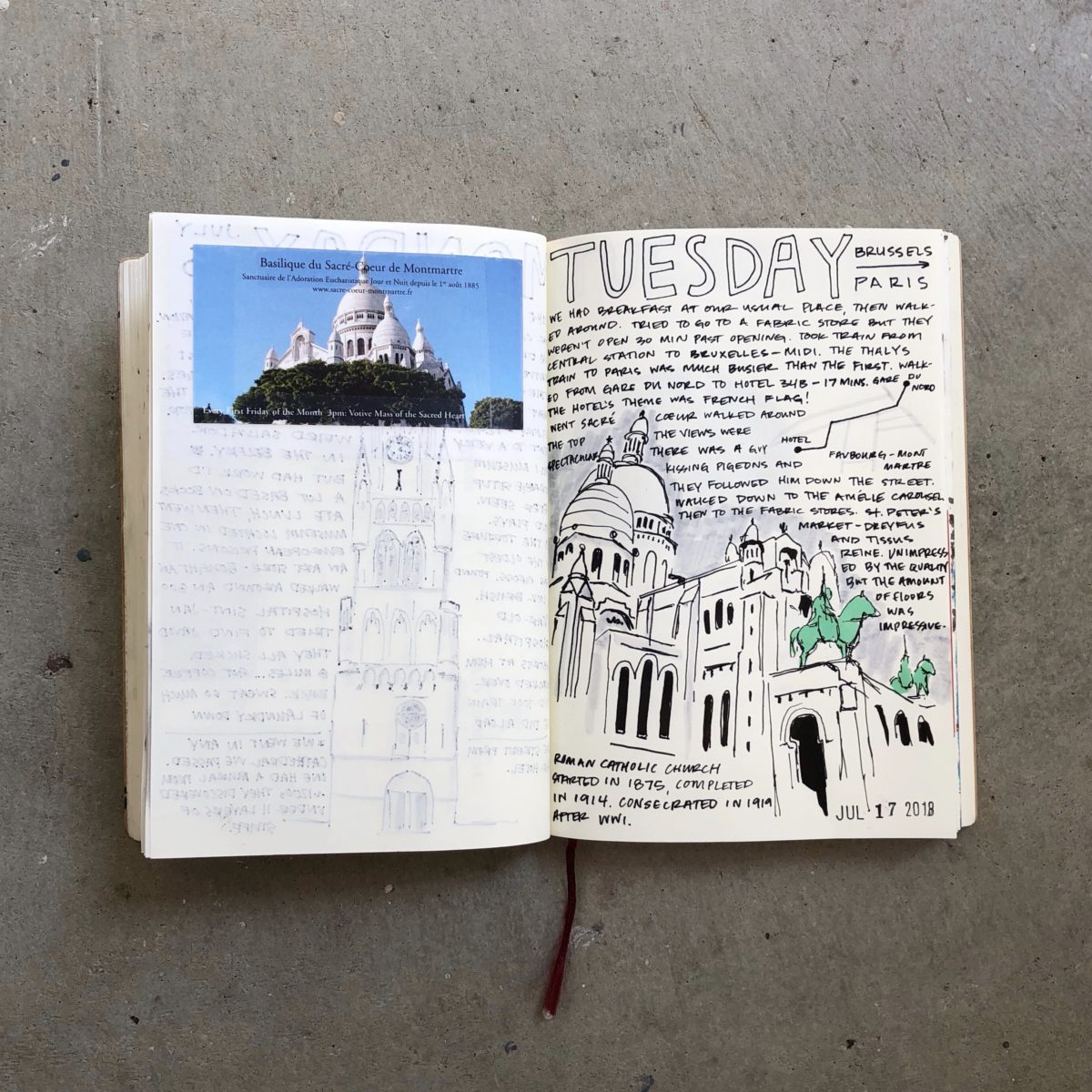 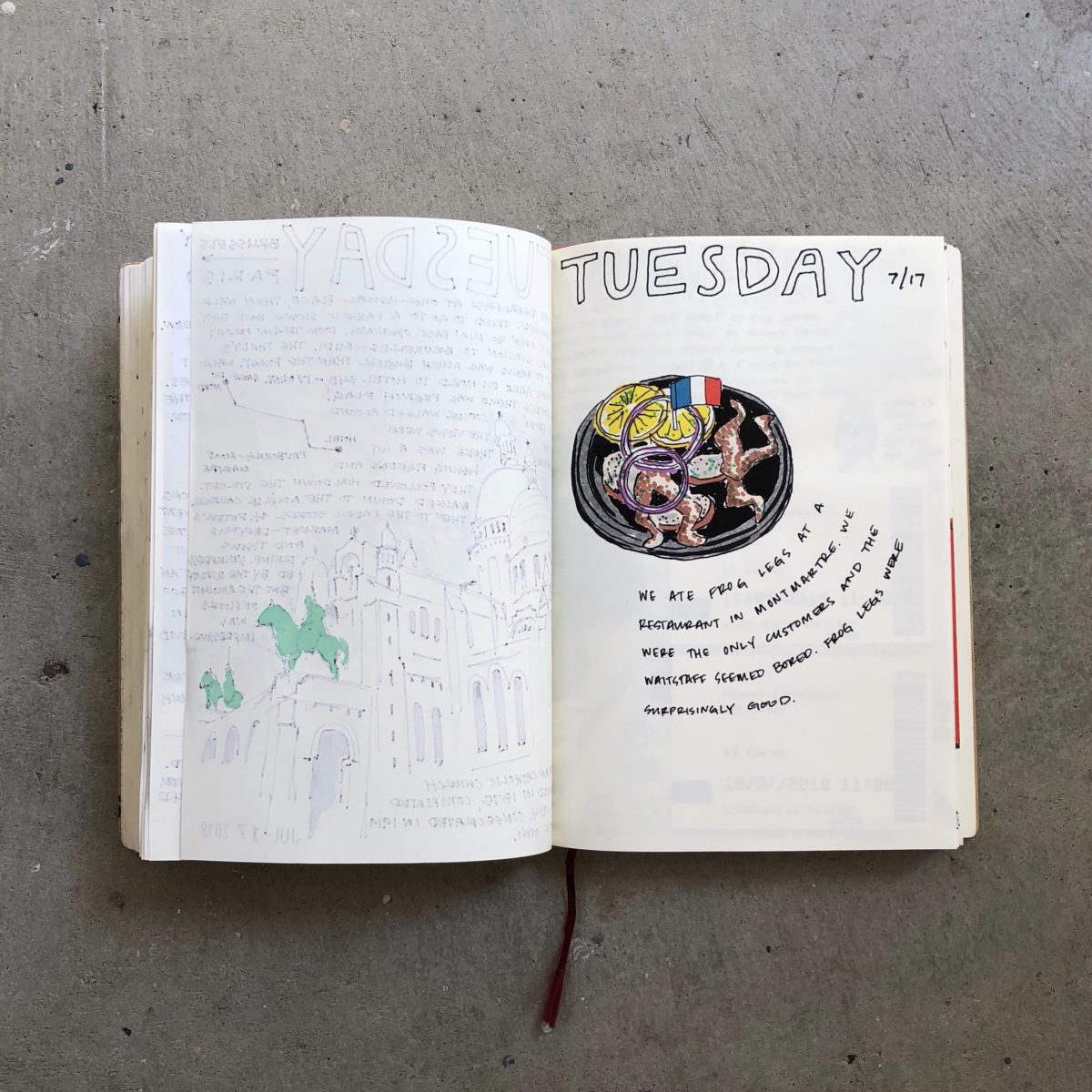 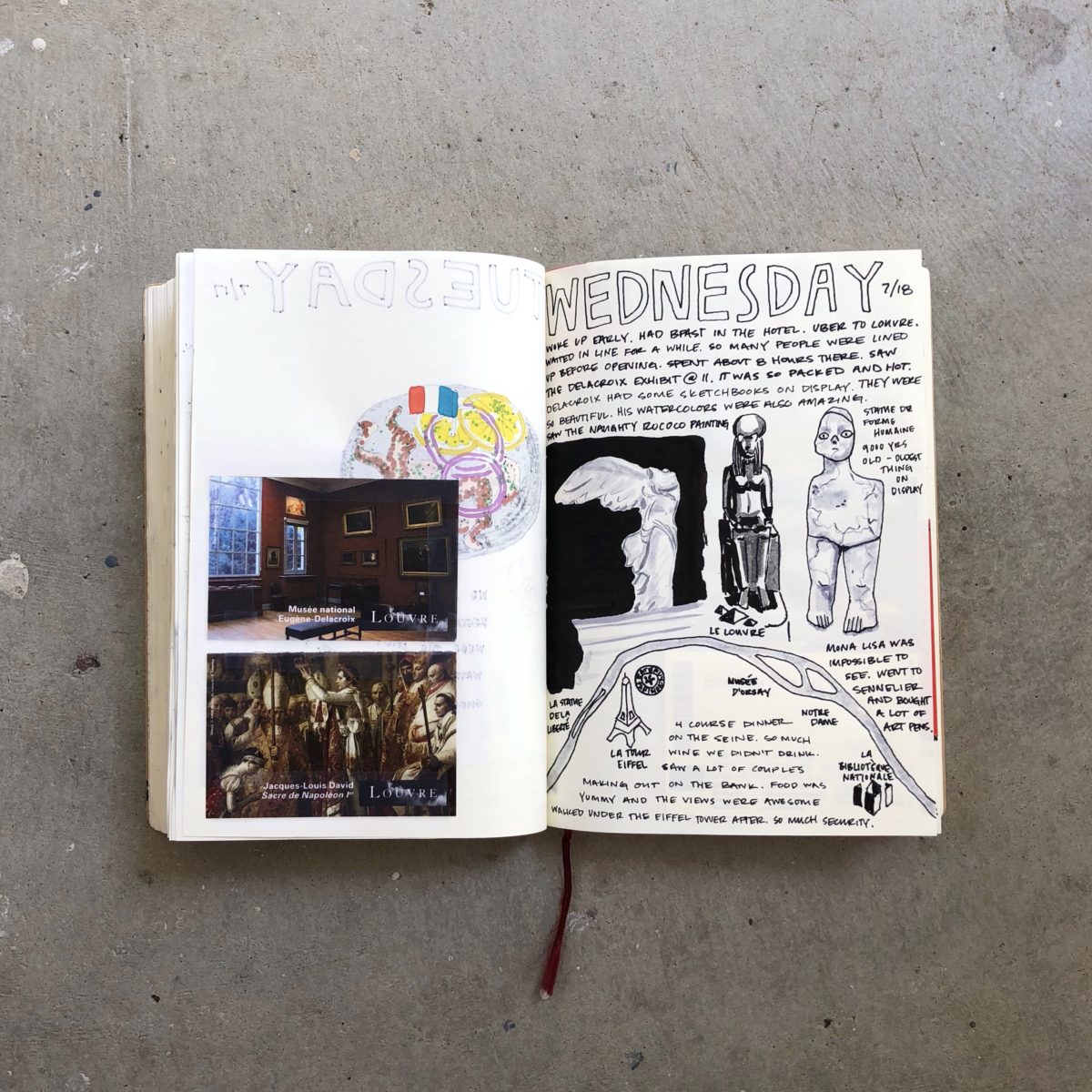 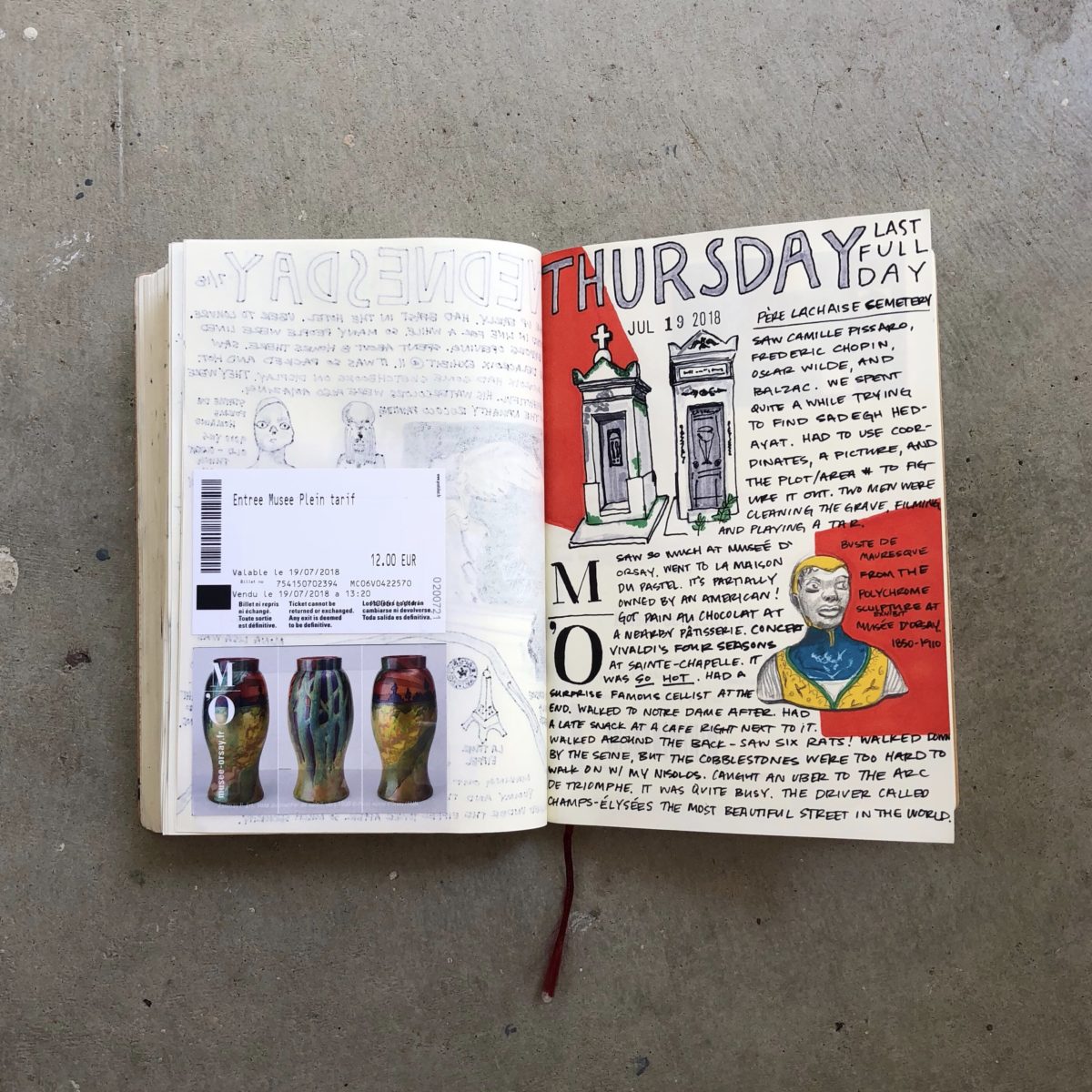 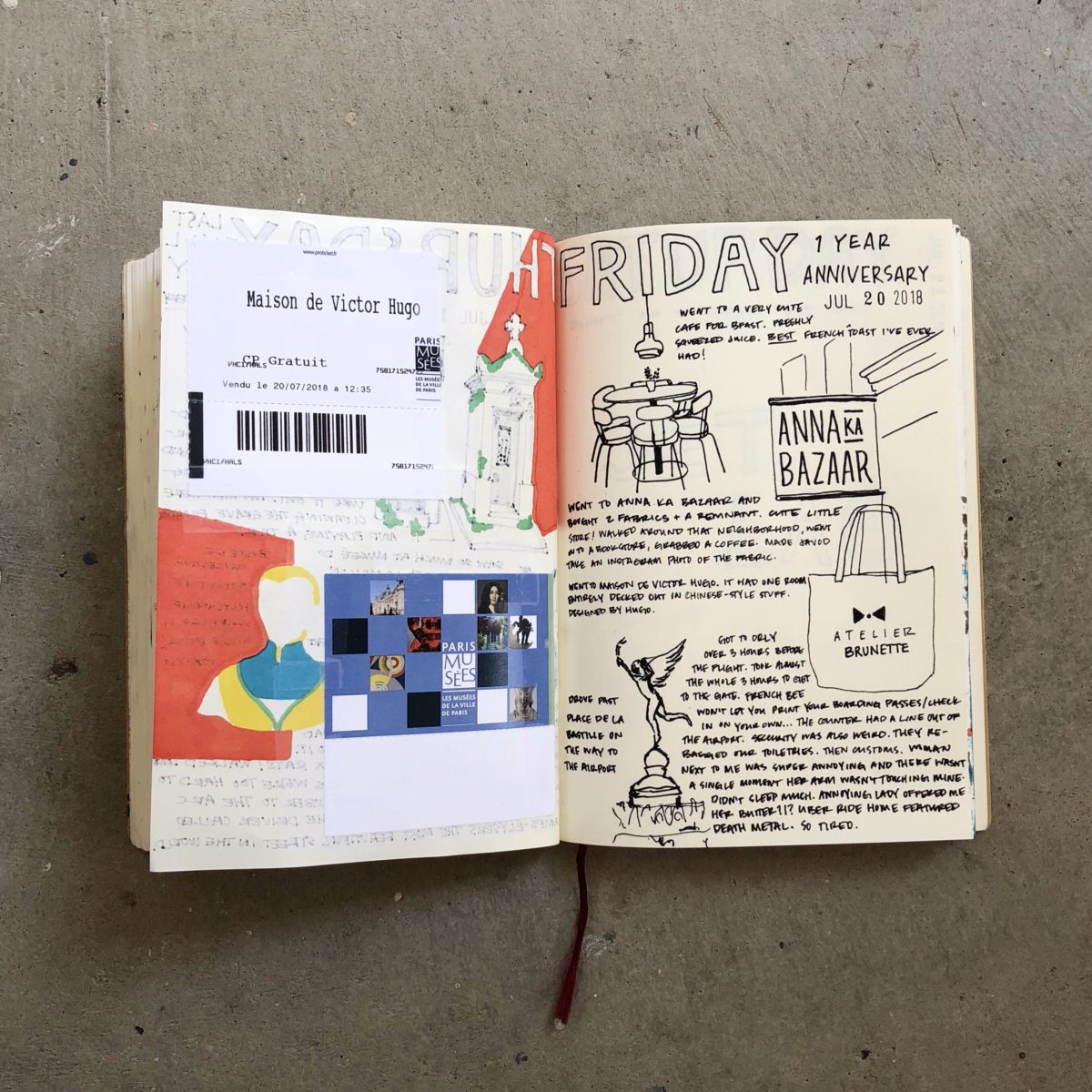 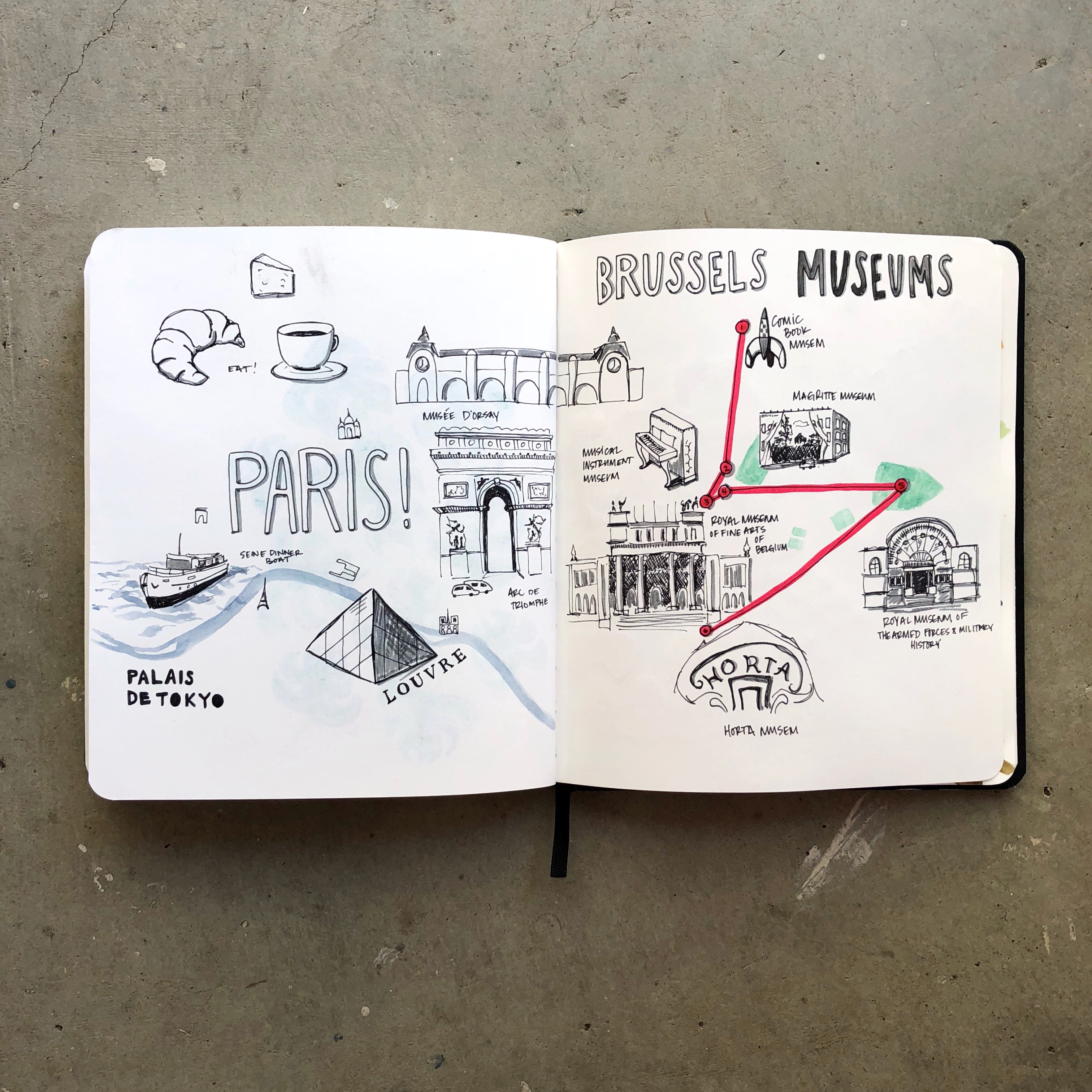 Planning trips in my sketchbook. Please comment with any art, architecture, food (no booze, please), parks, fabric, and thrifting things to do in Paris and Brussels!

Remember how I said I was obsessed with making repeat patterns? Well, I’ve made 23 in the past two weeks. Here’s a gif I made of all but the most recent one while trying to figure out Photoshop last night. Once the school year ends, I plan to dive into Adobe Creative Suite and upload a lot of these to Spoonflower. I’m excited. I’ve wanted to try my hand at making repeat patterns for quite some time now. Since I’m lacking in the requisite computer skills and the analog way requires slicing up a drawing, I just kept putting it off. This week I had the idea of making a low-risk tiny drawing just to test the whole process out. I made a little wiggle drawing on a post-it and BAM – a repeat pattern was born. It’s safe to say I’m now obsessed. Drawing challenges have also been something I’d like to take a stab at, but things like the 100 Day Challenge and even the 30 Day Drawing Challenge have felt too, well, challenging. However, I think I’ve found my introductory challenge project. Tiny repeat patterns take away the hurdle of coming up with a drawing idea each day and the process is really enjoyable. 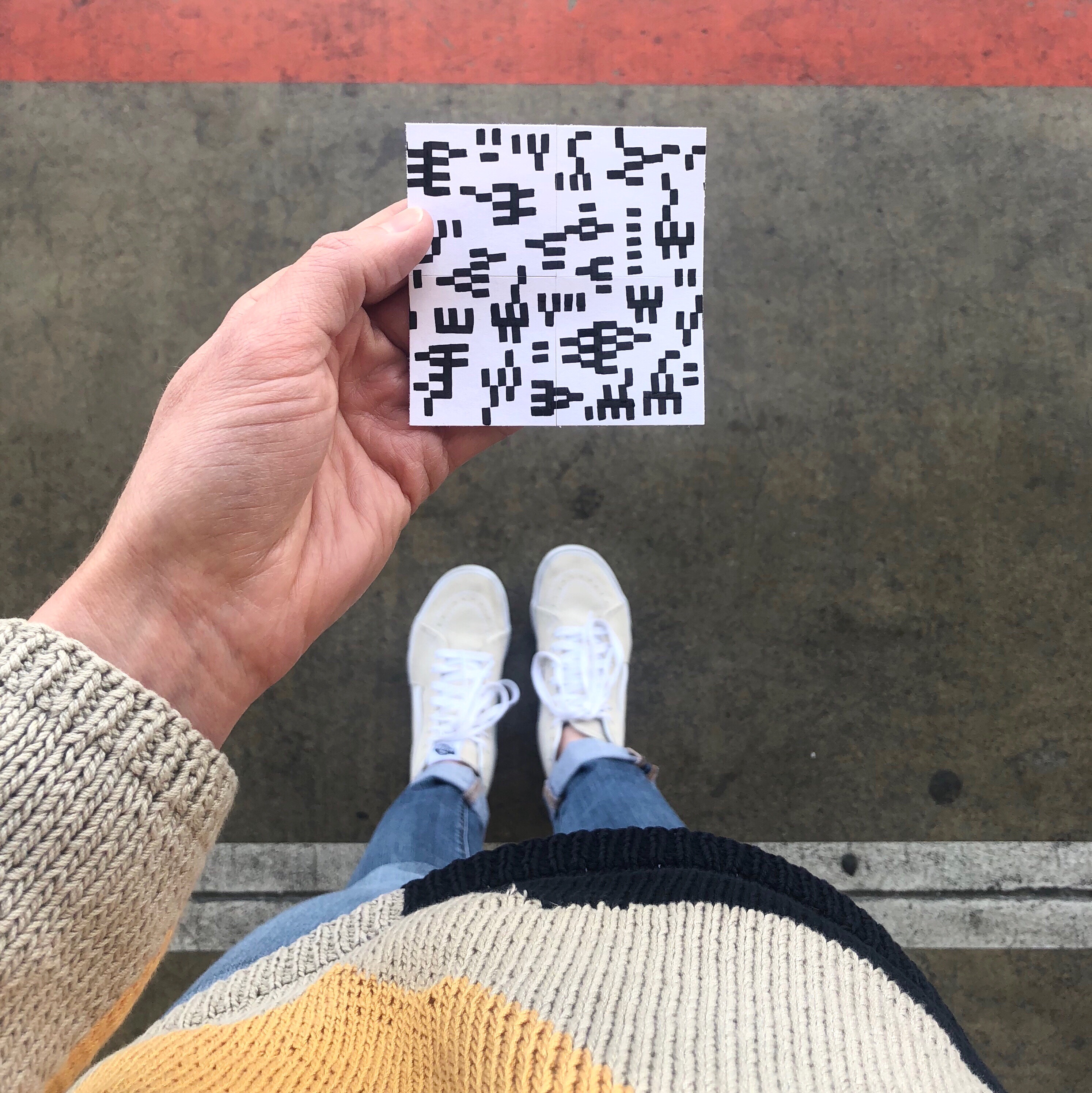 I’m going to challenge myself to make one tiny (3″ x 3″) repeat pattern a day for 30 days. I’m going to share the patterns on Instagram with the hashtag #repeatpatternparty. In addition to creating a daily drawing habit, I’m hoping this challenge will also motivate me to learn how to use Adobe Illustrator. I’d like to turn some of these repeat patterns into fabric on Spoonflower. 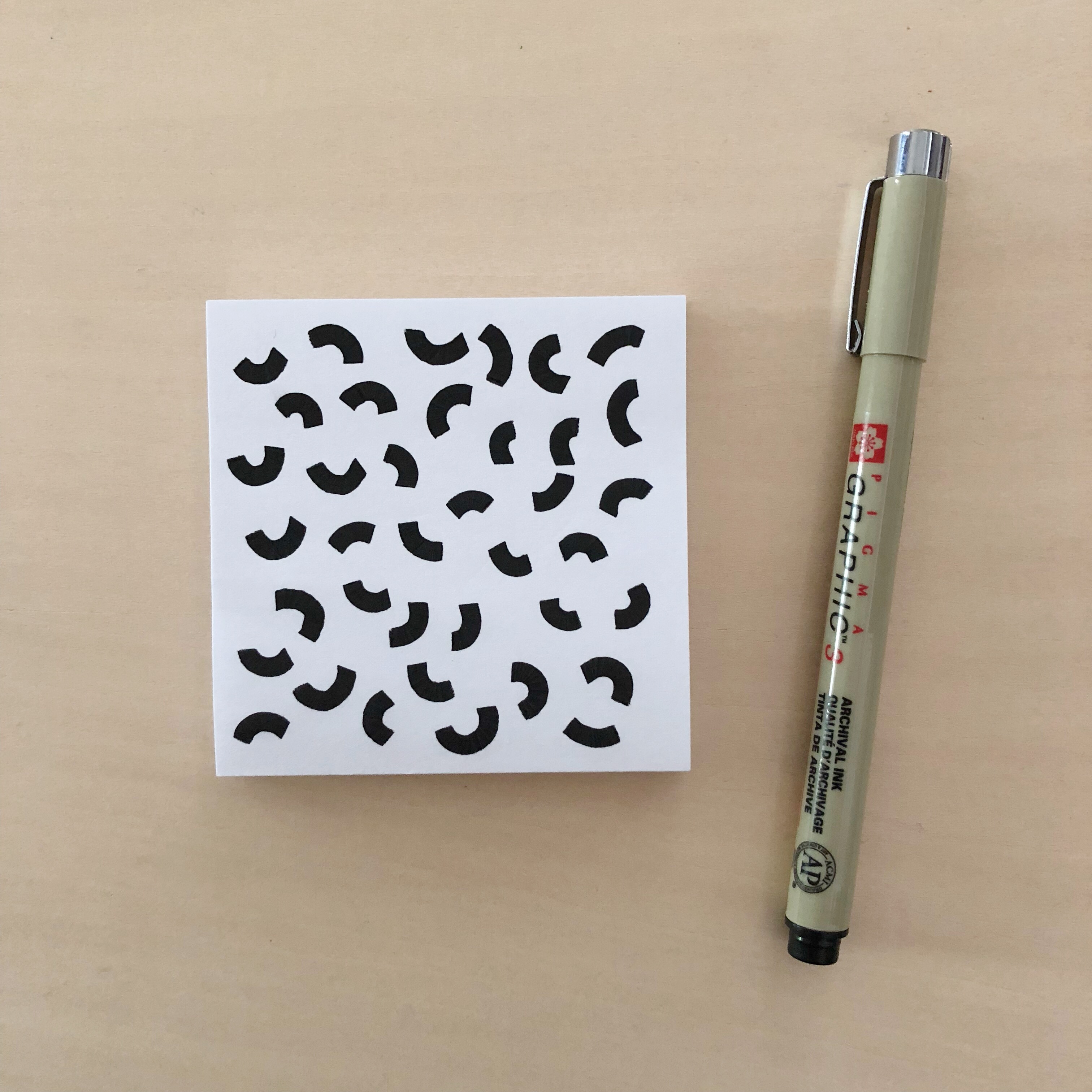 STEP 1 – Draw pattern in the middle of post-it (or paper – it doesn’t need to be square either). Pattern or drawing cannot touch the edges of the paper for this to work. 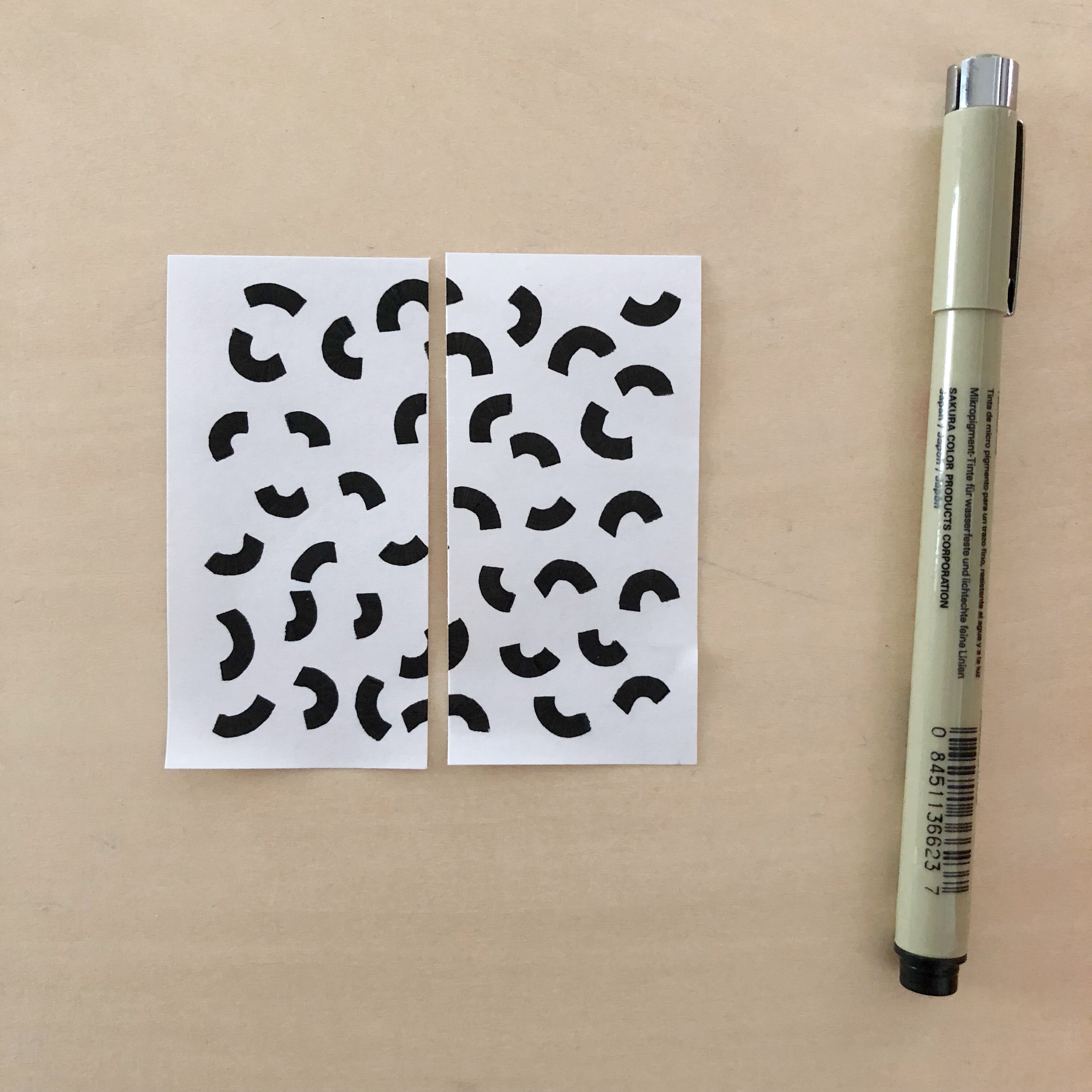 STEP 2 – Cut paper down the center. Accuracy is important here! 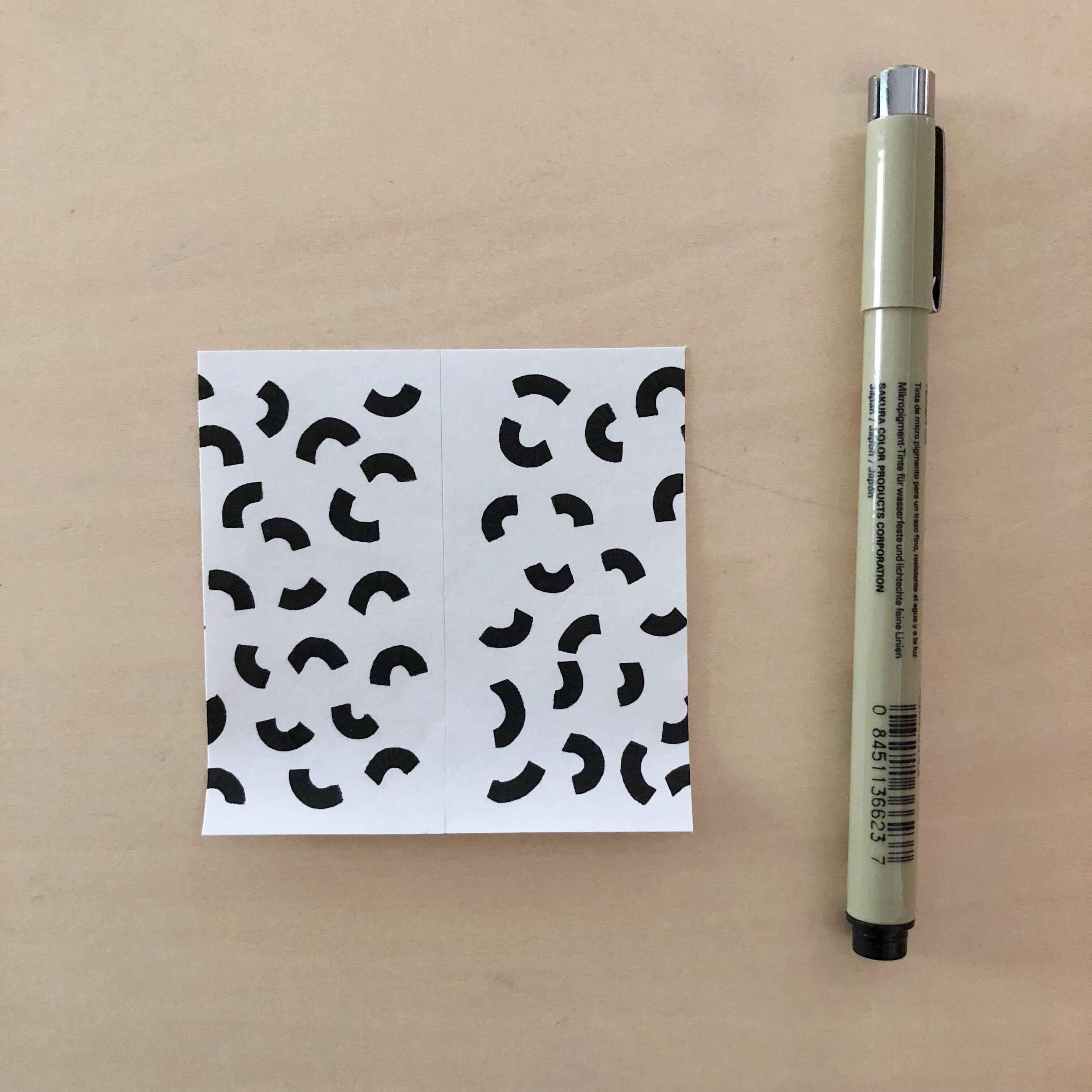 STEP 3 – Bring the left side over to the right side and carefully tape together. Make sure your don’t rotate the pattern. 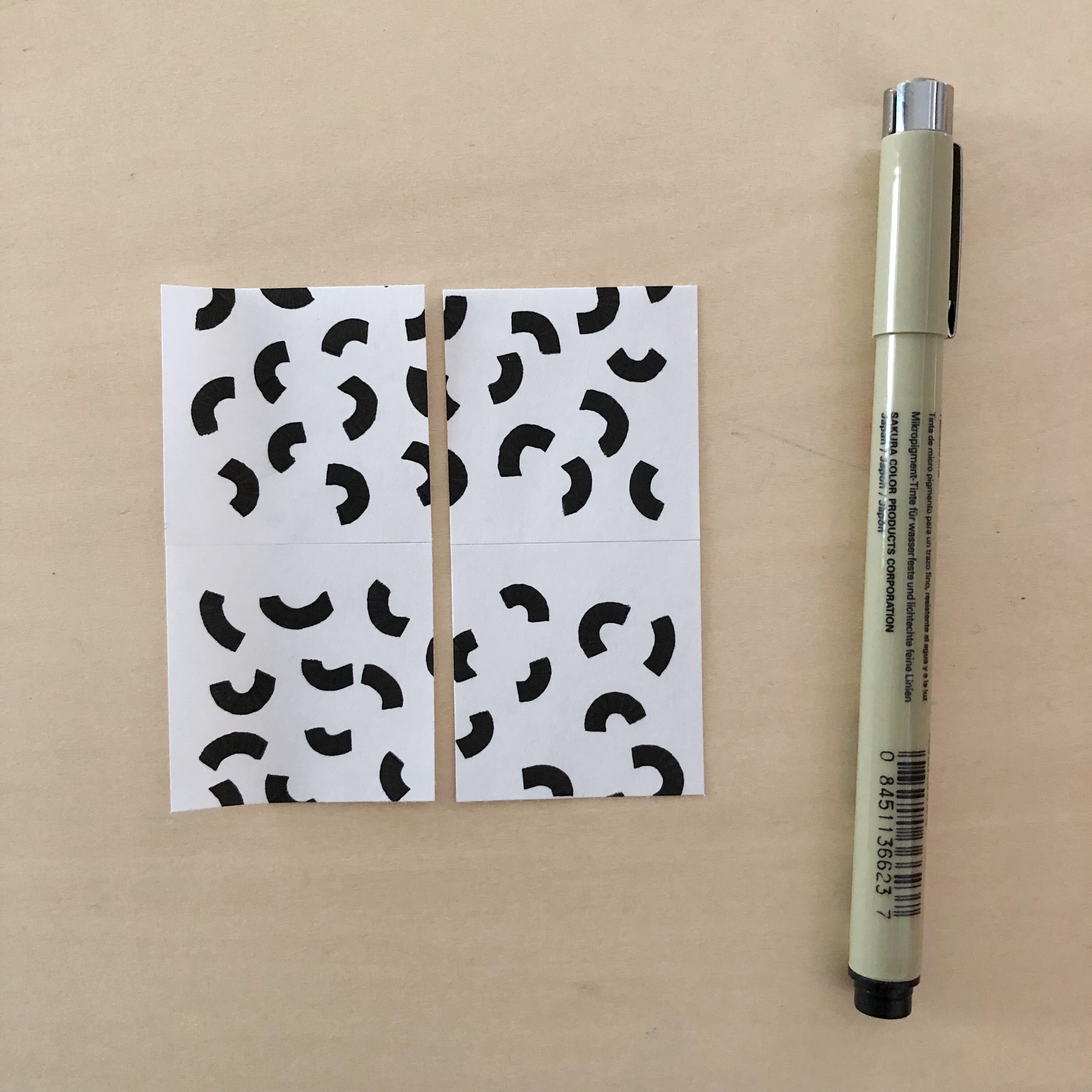 STEP 4 – Rotate the design and cut down the center (second cut should be perpendicular to first cut). Again, accuracy is important here. 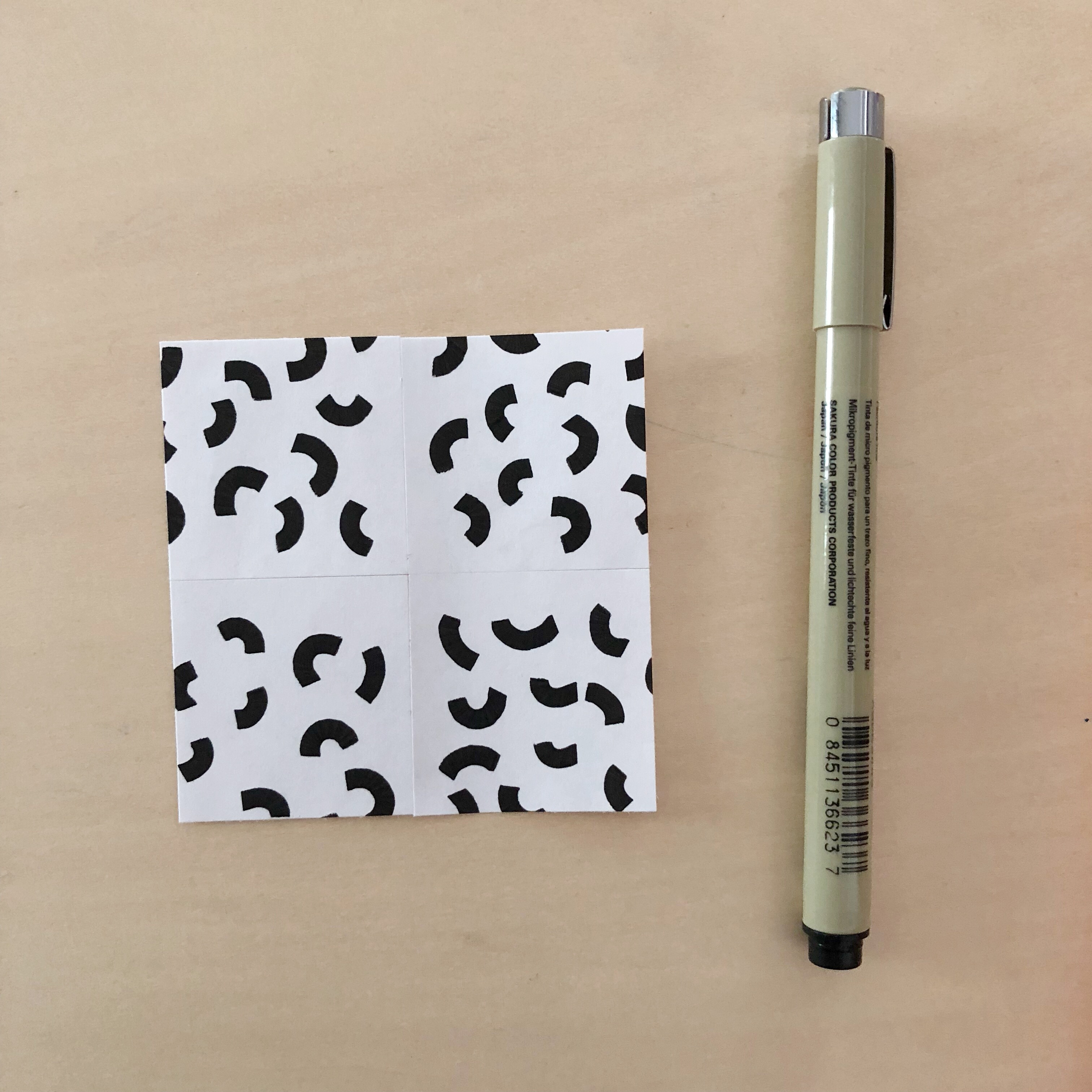 STEP 5 – Bring the left side to the right side without rotating the design. You’ve now taken all of the post-its edges and brought them to the center. 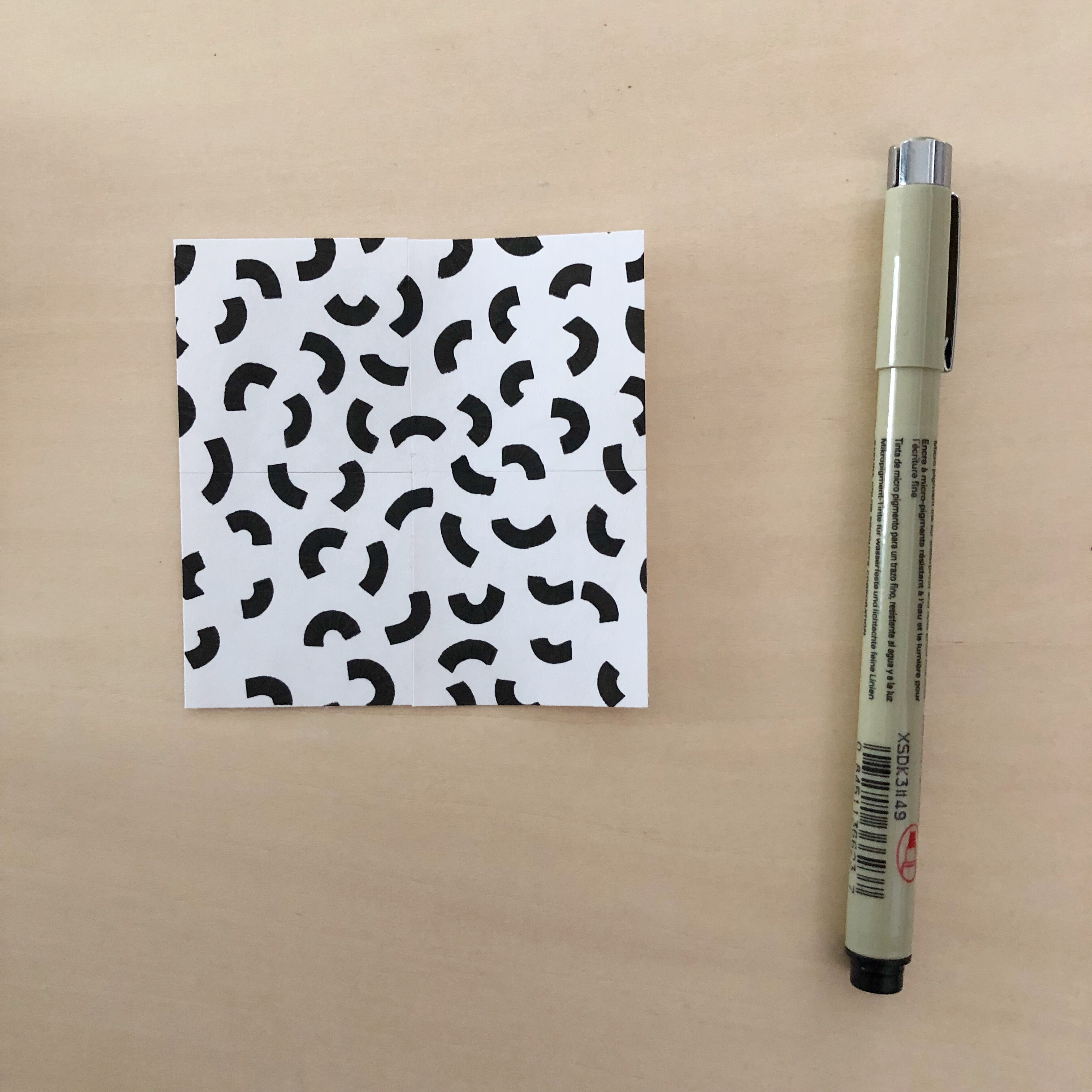 STEP 6 – Fill in blank spaces. Be sure to not take any of the new marks to the edge in this last step. I then like to make three copies of my post-it to check that everything worked out.

I’m really having a moment with this shape. 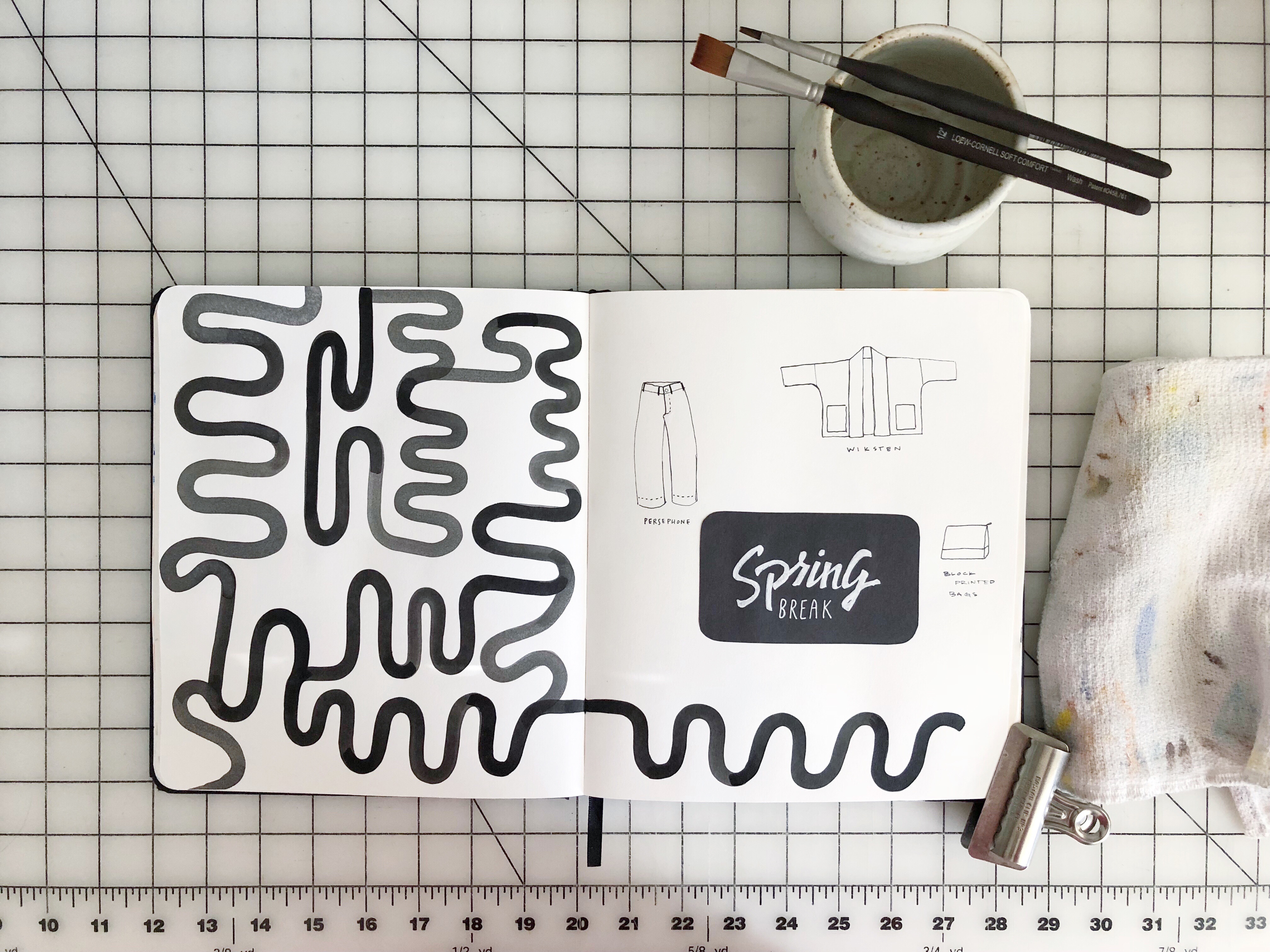 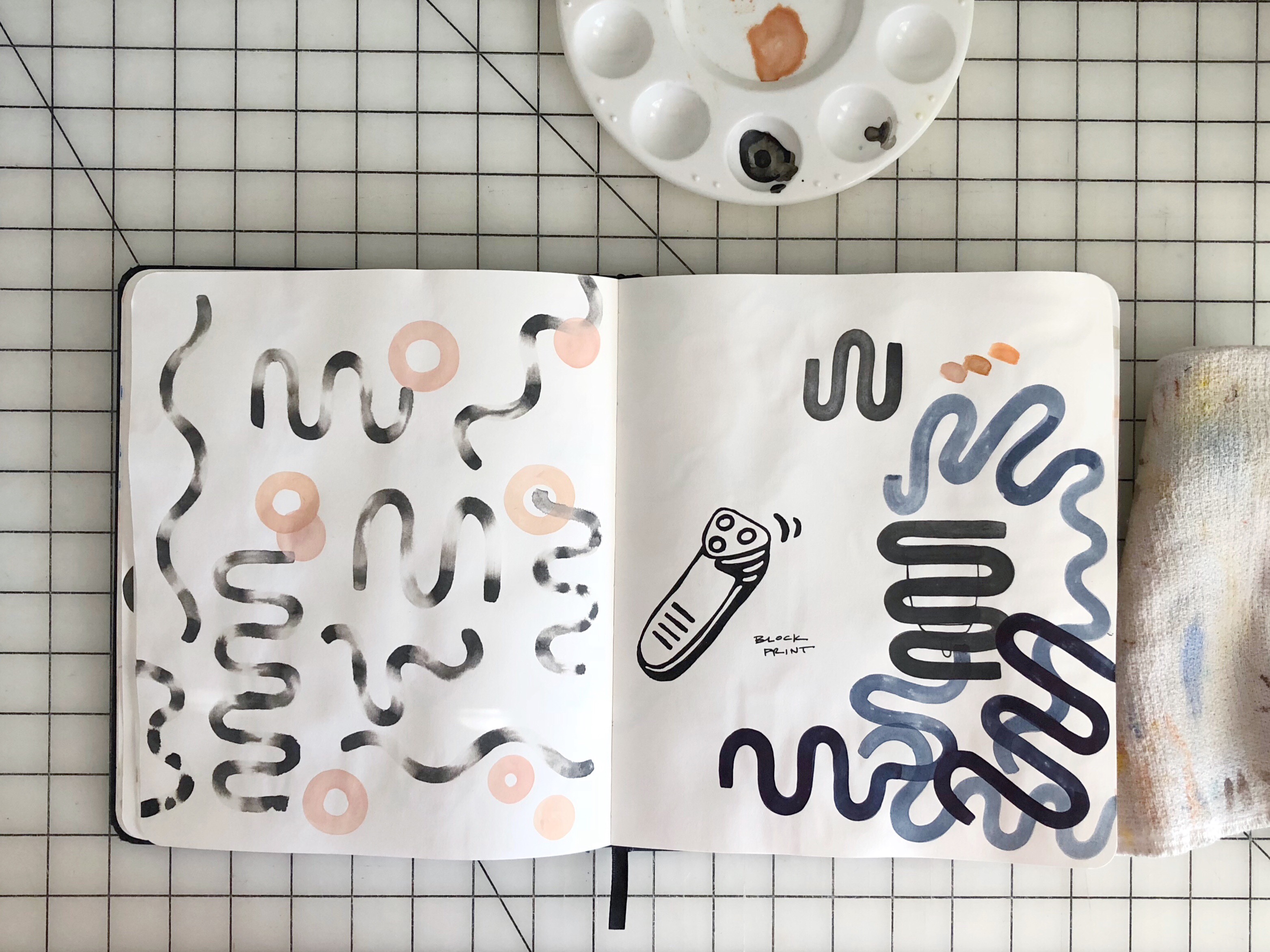 It was really starting to feel like Spring Break would never get here. Last Friday felt like five days. And I’m definitely not counting, but there are 8 weeks left of school.  Eight.  8.  E. I. G. H. T.   This middle school teacher really needed some time off.

I’m trying to be gentle with myself this break. I have a tendency to over estimate what can be accomplished during a small amount of time off and despite usually getting a lot done, it never feels like enough.

So aside from one project and my PM&D homework, I’m taking it easy. Going to read this book, probably clean some areas of the house, and visit some fabric/thrift stores.

I don’t have to make all the things.