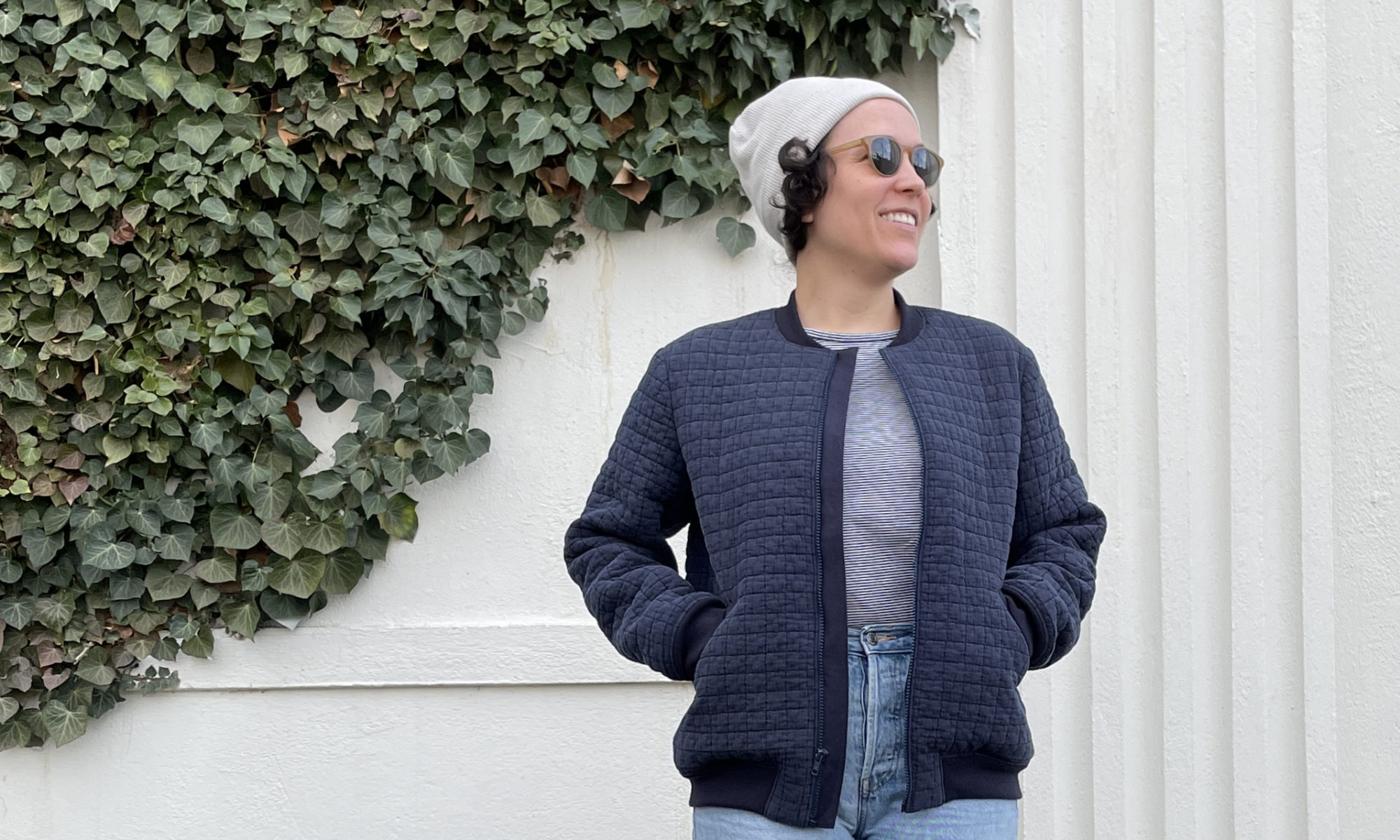 On a rare trip to Joann Fabrics a couple years ago, I found this quilted fabric in the upholstery section. I really liked the grid pattern and it almost looked like some quilted denim jackets I’d been eyeing.

I thought it would make a really cool Ilford jacket, but I didn’t make a muslin and I didn’t really read through the instructions for the plackets and collar. Once I was able to try it on, it was far too big and I started to question how good those details would look in this bulky material.

No shame to the Ilford pattern at all, this was just a case of wrong size + weird fabric = mental pattern abandonment.

Another year or so later, the Seamwork Larkin was released and after passing by that abandoned Ilford in my closet, inspiration hit.

The pattern is not drafted for bulky material, so I knew it was a bit of a gamble. The poly batting is pretty lofty, so this time I thought I should do some tests before diving in.

I had enough scraps leftover from cutting out the Ilford to make a sample welt pocket and it was easier and nicer looking than I thought. On the final jacket, I deviated from the instructions a bit by hiding all of the edge stitching in the ditch and omitting the bar tacks. I think they look pretty sharp.

After the successful welt pocket, it was time to source more materials and cut up the Ilford. I wasn’t sure there would be enough fabric since the pattern pieces have very different shapes, especially the sleeves. I was barely able to get two sleeves, two fronts, and the back out of it. But I did, and pattern matched too!

For the Ilford, I had purchased a small amount matching Kona cotton for the under collar and button plackets, but didn’t have enough for the Larkin facings, welts, and zip guard. I bought more Kona cotton in the color I thought I had originally purchased, but it’s definitely different. Dang dye lots.

Sourcing matching ribbing, lining, and a zip wasn’t the easiest, but I think the subtle color differences are kinda nice. I bought a lot of multiples trying to get the best match. WAWAK was out of the color zip that looked most similar, but once most of the tape was hidden, the one I bought ended up blending in pretty well. I found the ribbing and lining at Mill End. The ribbing I chose isn’t quite as robust as the other one and it collapses a little bit, but sometimes you gotta make those trade offs.

I made a straight size 8 with no modifications other than adding a little hang loop. Currently, my measurements are 38″ bust, 31-2″ waist, and 40″ hips.

Aside from the sleeves being a wee bit too long (what I get for rarely making a muslin), I’m super happy with this jacket! It was the perfect slow down project with some fun challenges from my funky fabric choice. I’ve worn it almost every day I leave the house and it’s a great mild winter layer.